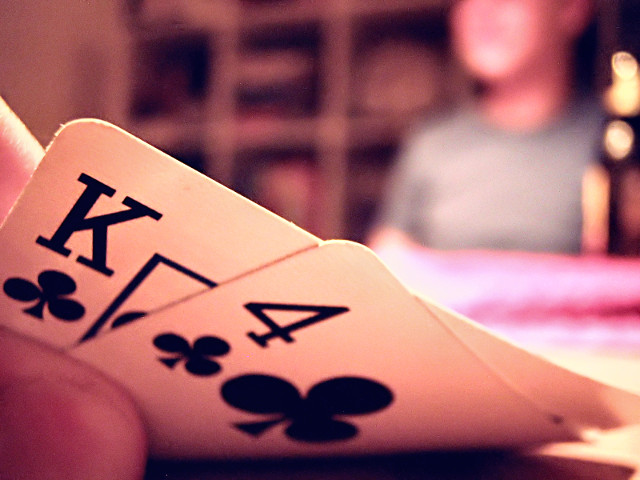 Texas Hold’em might not be as popular as seven-card stud but it is extremely close. In many poker rooms, Texas Hold’em is the most dominant. Many players feel that it is more exciting and sophisticated than plain old seven-card stud.  Texas Hold’em does provide a lot of the action. Between 9 and 12 players can be accommodated at once. The gameplay is also quite fast. Most of you already know this but Texas Hold’em is used in the World Series of Poker tournament.

How does Texas Hold’em play out?

The first thing you may notice is that when you check out a game of Texas Hold’em , one player will have a white disk labeled “DEALER”. This disk only indicated that the individual is the designated dealer. All of the functions and responsibilities of dealing still fall to the house dealer. There aren’t any face-up cards to determine who acts first in each round.

After the first round of betting has been completed, the next round will begin. First, the dealer “burns” the top card of the deck. It means that the card is taken out of play, face-down. He then deals out three face-up cards in the center of the table. These three cards are known as the “flop”and they are community cards that are shared by all players. The first active player to the left of the dealer, will be the first to act. There are also no more blinds to deal with.

Once the second round of betting has been completed, the dealer burns another card and deals the fourth community card. The fourth card is known as the “turn” or “fourth street.” After another betting round, the deal will burn yet another card and deals the fifth community card. This time, it is known as the “river” or “fifth street.”

By having a designated dealer, players know that the cards will be dealt to his left. The first player on the dealer’s left that’s still in the game, will act first on each round of betting. This leaves the dealer to act last on each betting round but not on the first (explained shortly). After a hand is completed, the dealer moves around one position clockwise.

Texas Hold’em games rarely use antes to seed the pot. The pot is built through the use of “forced” bets, called “blinds”. The blind bets are posted before any cards are dealt. The two players to the left of the dealer, make the blind bets. The first player will post a small blind which is usually a fraction of the big blind.

Players receive two personal face-down cards. The five face-up cards are designated as community cards which is shared with all the other players. The winner of a hand will either be the players with the best five-card hand made with the seven cards or the last remaining player in the hand. The second player posts the big blind, which is usually equal to the minimum bet.

After the blinds are posted, the dealer gives two face-down cards to each player, clockwise. The player to the left of the big blind is the first to act because the small and big blind have already started the betting.This player has three options available: fold, match or raise. After the player’s choice, the play will continue clockwise until all of the players have made their choices.

When the betting returns to the players who posted the blinds, they have the same options as the other players. The only difference is that they need to make up the difference in the bets due to the partial bets they have placed (blinds).

Another note on the blinds: in most of the games, they are considered to be “live blinds.” Which means they can raise when the betting comes around to them even when no players have raised. Since blind bets are “forced”, these players can raise their own bets.

The dealer will determine the winner and push the pot towards that player. In Texas Hold’em, players will often have the same hands. In the event of a tie, the players split the pot. At the completion of the hand, the dealer moves one position clockwise and the next player is the dealer.

After the whole process, the next hand begins.